After spending 4 days in Sydney, we flew to Ayer’s Rock(Uluru) to see the famous rock formation and have once in a life time experience ‘Sounds of Silence’ dinner under the stars.

Known as Northern Territory’s Red Centre, Uluru (Aboriginal and official name) is sacred to indigenous Australians and is thought to have started forming around 600 million years ago. Located in the heart of Uluru-Kata Tjuta National Park, the rock originally sat at the bottom of a sea, but today stands 348m above ground.

The spiritual heart of Australia, Uluru is notable for appearing to change colour at different times of the day and year, most notably when it glows red at dawn and sunset. We were so excited to have a sparkling wine and Christmas dinner watching the amazing sunset and billions of southern stars, however, Uluru welcomed us with a heavy rain and damaging flash floods, described as a once-in-a-half-century weather event! It was unbelievable while we were warned about the really hot desert climate before planning our travel. 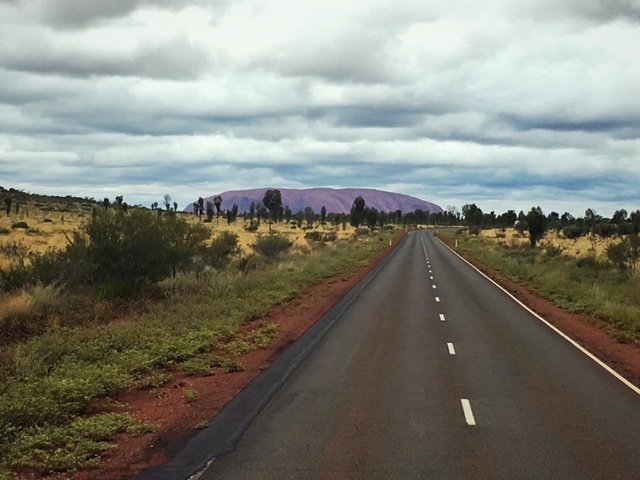 First of all, if you are flying to Uluru-Ayer’s Rock from Sydney, sit on the plane’s left side so you can see the rock from top before landing.

Arriving at Ayer’s Rock airport, we were welcomed with a few buses ready to take us to our hotels for free. As there are 4 hotels which were all managed by Ayers Rock Resort, it was a hassle free transportation from the airport to the Outback Pioneer Hotel.

Check in was smooth but the room we had was pretty far from the reception area. After settling in, we received a letter from the tour organisation company for the cancellation of Sound of Silence dinner which was supposed to take place on the same evening. The biggest highlight of our Australia travel was ruined as it was going to take place indoors in a hotel instead – not under stars in a romantic set up. That was the only reason we flew to Uluru and arranged a transportation to Alice Springs.

Knowing that we are leaving Uluru and heading to Alice Springs the next day, we headed to the town centre to check if there is any other tour or even a rental car so that we could drive to the national park and see the actual rock. But it was impossible, all cars were rented out and tours were fully booked. We headed back to the hotel with the free shuttle, on our bare feet as it was raining like crazy.

Tip: If you don’t want to be limited with tours and free shuttles, it is better to rent a car in Uluru. Also, Uluru tours don’t include the entrance fee to national park (25 AUD) so make sure to ask this to your tour organiser beforehand.

Where to stay in Uluru:

There are only 4 hotels/campgrounds in the area, all managed by Ayers Rock Resort. Sails in The Desert seemed like the most popular one, however Outback Pioneer Hotel was more affordable even though it was 200 Euros per night.

Outback Pioneer Hotel was below average as it was very old and has only a few amenities. There is a free shuttle that goes around all hotels and the town centre where you can book tours, shop souvenirs or buy groceries. The hotel has a bar and an open bbq area, and it is the only place visitors of Uluru can take away alcohol. Alcohol consumption is prohibited for locals so you have to buy your alcohol yourself.

The reception was so crowded and there was a chaos. Imagine a small reception hall with towels on the ground so that people can dry their feet. Luggages on the other side – waiting to be transported to the rooms and of course people waiting for their tour buses, shuttles or check in/out times.

It wasn’t worth the money as we ended up leaving the spiritual centre by not even managing to approach the rock, and waiting in the hotel wasn’t really fun as well because of all the chaos and limited number of facilities.

We were picked up by buses and taken to the Sails in The Desert Hotel. There was unlimited sparkling wine, cocktails and aboriginal dance show in the cocktail room, however, we were so disappointed by being stuck in a closed area while it wasn’t even raining outside at that moment. While searching for options to see the actual rock, we met a hotel employee who offered us his car for the next morning after hearing our stories, and we agreed to come to the hotel to pick it up first thing in the morning.

Later on, we were moved to another room for dinner. The food was good but it wasn’t worth 230 AUD per person. Well they credited 50 AUD of it back to the hotel stay but the dinner was not worth 130 Euros at all.

Next morning, we woke up early so that we could walk to the hotel to pick up the nice guy’s car. But leave walking on the road to reach the guy aside, even getting out of our room was almost impossible. The shuttle also starts to run at 10:00 AM so we had no other choice than forgetting about the rock.

After checking out, we sat outside at the bar for hours, and waited for our shuttle to Alice Springs. Everywhere was wet, and we were sitting on the tables trying to protect us from the rain – wishing it also washes all the disappointments away from us.

As the roads were flooded, the bus driver skipped to pass through Kings Canyon and we reached Alice Springs after 6 hours at the evening. On the way, we stopped at the Middle of Australia and saw some emus at Erldunda Roadhouse onsite emu enclosure. 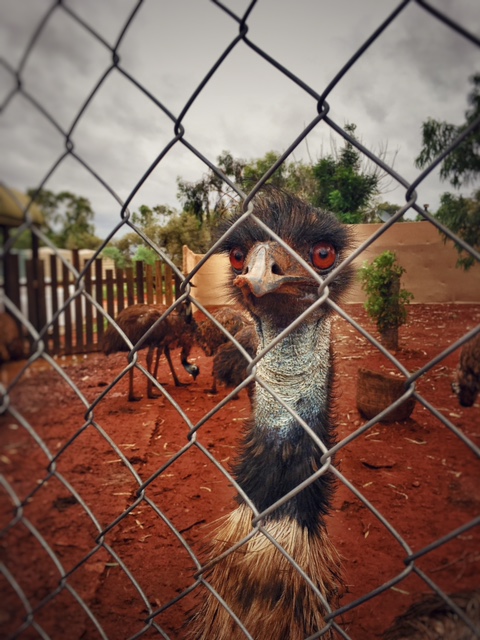 When to Visit Uluru:

If you want to avoid the rain and experience the real Uluru, visit between May and September.

Where to stay in Alice Springs:

After checking in DoubleTree by Hilton at Alice Springs after a long and wet journey, we went downstairs to eat at the The Deck Eatery & Bar. We were almost declined to be seated as we didn’t have a reservation even though we were hotel guests. Disappointment followed us when the waiter didn’t get the order properly and showed up with something else after minutes of waiting.

There was another hotel next to ours, Lasseters – you may want to prefer this one if you are interested in casinos. Next to DoubleTree, there is also a hotel called Desert Palms which seemed more affordable and family friendly.

Alice Springs is known as a popular gateway for exploring the Red Centre and Alice Springs Telegraph Station Historical Reserve is one of the main point of interests in the city. Some people prefer to stay in Alice Springs and take tours to Uluru while we preferred the other way. Visitors can also climb to the top of Anzac Hill for sweeping views over Alice Springs and the distant MacDonnell Ranges.

During our day visit, we walked to the centre and Telegraph Station. The road was empty and we were expecting to see some kangaroos on the way – as the bus driver from Uluru suggested. Taking the Riverside Path along the Todd River, we’ve seen one kangaroo and a snake around the bush grounds. Rivers in Alice Springs and around are generally dry, but they still call them rivers.

If you are interested in riding bicycles,  there are bikes available for hire at the Trail Station Wi-Fi Café, when you reach the top at The Telegraph Station.

The day was over, and we were ready to take off to Cairns to see our second highlight of our trip – The Great Barrier Reef.